Played an outstanding game last night with Rob Wolkey and Rob Robertson. This one just screams to be used as a 3 player scenario. Late-war Russians v. Germans, 5.5 turns. Metal for both sides, including.....Hetzers (in homage to Psycho - yes, you will always be Hetzer-boy. Get over it.)!

The other reason that this scenario was picked was because I am working on learning combined arms tactics. Mostly when you have a combined arms scenario, unless it's a really big one, the infantry are what's important and the tanks are support (important - but still support). In this one, the tanks are all that matter, and the infantry play the support role (tying up the Germans so they don't get time to start 'Fausting everything in sight.

The scenario is played on two boards as shown below. The Germans must defend the west side from the Russians attacking from the east. Here's the catch: The Russian forces are split into two parts (one entering on each board). The Russians win immediately if they exit >= 4 AFV off the west edge of the map - but they have to exit the same board they entered on. Hence the 3 player playability - the Russians naturally lend themselves to two independent groups. 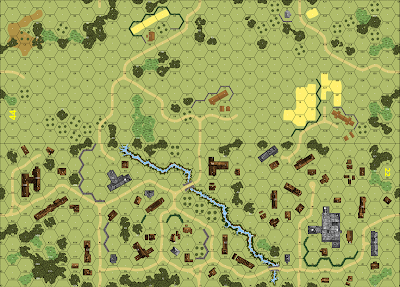 The Germans must set up on/west of K on 22 and W on 44 and they get some reinforcement armor on turn 3. There are a couple of other caveats to the scenario - Germans can set up one HS (with SW/SMC) or one AFV HIP. The Russian prior to setup secretly designates one of his IS-2's as an IS-2m (way better front armor) that does not have to reveal until it affects a TK roll.

The Wolkster's defense looked pretty evenly spread throughout the mid-board. Particularly daunting were the 5/8" ?'s in 22Q3 and 22Q4. He LOVES that spot and it brutalized me from there in T2 - The Puma Prowls when I was first learning armor mechanics.

I learned the value of riders this scenario, though, not as well as I needed to win through on my side. Rob R.
used riders to come in on the road on board 22. He then dismounted and was in perfect position to armored assault across the bridge in 22K2 and get to 22N0 and M2 for their assault on the infantry that was on that side of the board. Me, I decided to use the cover for my approach as I figured the AA gun was on my side of the board somewhere. I wanted to use the beefy IS-2 in the end game so I kept it out of sight as much as possible. I figured the gun was in 44S7 or somewhere in the backfield like 44F8 so I sent a couple of tanks over to the S7 building with riders to try and draw it out to fire. If it wasn't there, the squads could harass anyone that dropped concealment out of the German backfield group in the 44N5-N4 cluster of trees/brush. The rest of my guys would go up the right side of the board and try to break out that way. Not a terrible plan overall, but there are better ones (I'll get to that).

The Wolkster's dice must have missed me or they were overwhelmed by Rob R. and my terrible dice luck powers or something, because his defence on Turn 2 melted on board 22. No PF's , broken MA's...if it could go wrong/break/whatever, it happened. Rob's tanks just walked right up the road facing basically no opposition. By the end of turn 3 his back was really to the wall on the South side of the board. The north on the other hand was still touch and go. I had shifted a little bit and sent another tank around through the 44T8-T9 corridor to swing around and go through the brush. This was a REALLY good idea, however, my IS-2's drew out the AA gun finally (HIP in 44C7 with good coverage on basically the entire backfield).I made the mistake of presenting it the front armor on one of my 3 tanks...which gave the Hetzer in K5 a nice side shot (even though there were two more with front to the Hetzer). BLAM!...No more IS-2. Now it was 2-on-2 tanks and I couldn't hit anything to save my life. The Hetzers maneuvered around for rear shots and I even did a decent job surviving that.

On turn 4, in the end, it was the 'Fausts that got me. Me trying to maneuver presented the Germans with 'Faust side shots at 2 hexes. Bye-bye IS-2's. On the south side, his reinforcements got in and got one tank, he repaired the MA on one of the Hetzers and got another with a rear shot. It was over.

1.) Tanks need open ground. The better attack plan would probably have been for both sides to come through on board 44, overwhelm the forces there, and then re-split up for the exit.

2.) Not learned but reinforced...Mutual support positioning. I didn't do too bad of a job on this (it would have helped for me to roll something other than 10's on my TH die rolls, but the positioning wasn't terrible). Tank-to-Tank or Tank-infantry, a lone tank is a dead tank.

3.) Riders going into an armored assault is cool...way cool. You get the benefit of the MF for the tank for a while and then the TEM. Great for crossing choke points. I'm going to have to file that one away.

4.) When fighting late-war Germans, NEVER, EVER get closer than 3 hexes to the infantry. In the immortal words of Chas "Action Pack" Argent, "Don't 'Faust me bro!".

5.) Even in boards that are more open (like 44) you can still have choke points if the numbers aren't what they need to be. A single tank going down 44R1-Q1 trying to right hook, even if supported by infantry, is still 'Faust-bait to a squad in O2, N2, or N1

6.) General offensive principle: Overwhelm at one specific point to create a breakout. Splitting your forces, unless there is a good reason to do so, is dangerous and often costly.

This is a great little scenario and excellent for 3 players. All in all, a great way to spend a birthday evening...playing ASL with good friends.
Posted by Josh at 9:04 AM