I played Bob W. last night at my place (due to some family circumstances, Bob graciously agreed to make the trek up to my apartment). We played ASL96 - The Crux of Calais. This is a 9-Turn German v. British Scenario set in 1940 on boards 20 and 23. Bob gave me the scenario several weeks ago so I could think about defense v. offense. Below, I have illustrated a defense and the offense I would have done to attack it. 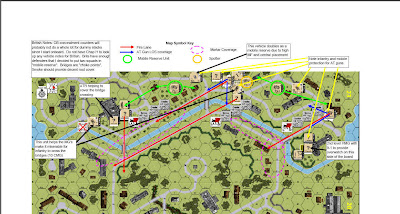 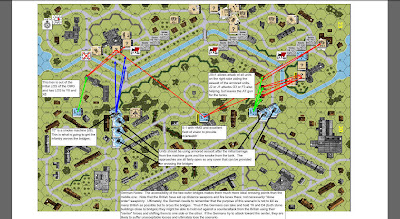 I set up according to my British set up above. I wanted to have Bob play the attacker because I wanted to see how he tackled the bridge choke point problem. He set up on the west side of the board, Schwerpunkt style, although, he did put squads in 20P9 as I would have for overwatch. Turn one was telling of how this game would go. He had two tanks over on the extreme west edge of the board that drove up and fired on 23AA6. One got a crit and flamed the wreck. DOH! Smoke was placed in 23X4 by the smoke machine in 20Z7. He also moved a tank up to 23P4 to cut off the east side of my defense.

Another of his tanks moved up and used sD on the bridge, and another on the far side. This wouldn't have been so bad, except for the wind. This was something I didn't take into account and it seriously screwed up my defense. Aside from having smoke screw up my main firelane from 23X6, there was in his AFPh now drifting smoke because of the wind down-canal from its original places either two or three hexes (depending on the type). This basically cut out my shots from 23M8 and 23N9. That was the story of this game. When the smoke dispersal went away, I took some shots (including the incredible endless ammo supply of the 76 Mortar raining down bad news on the bridge) and I left some decent residual on the bridge that did some damage to the crossing, but not enough. I lost position in the building across the bridge and another vehicle. By that time it was Turn 3 and 11:30. We were both getting tired but this wasn't going to get any better for the british. I had finally gotten my mid-board squads across the street and they were moving to reinforce, but they wouldn't get there fast enough and would have to take more fire to do so.

We called it a German win due to the lateness of the hour and my positioning. Post-game, we decided that the other AT gun would have been better served being in 23O9 and that I needed more squads over on the two sides of the board instead of in the middle. The HMG should have been in 23M6 and the MMG should have been in 23D6. Based on the layout, there isn't much chance of the Germans trying to take the middle bridge as they could receive fire from both sides doing so. Better to go one side or the other.

My biggest mistake by far was not thinking enough about the smoke and drift. My firelanes all had +6 minimum Hindrances to their line of sight (and that basically took my 40L in 23N9 out of the game). My fire lanes should have gone NW to SE instead of NE to SW (less hindrance due to drift on the initial shots as well as it would have gotten my AT guns better shots.

This is an interesting scenario. I learned that the key to crossing a bridge intact is lots of smoke and fire superiority.
Posted by Josh at 9:08 AM