I finally got to play F2F ASL again last night. MAN it felt good. I played Italian Brothers (A72) with Rob W. I was the McCain loving Republicans. OK, we weren't pro-McCain, but I lean toward the Rep. party line so it seemed like a decent joke at the time. 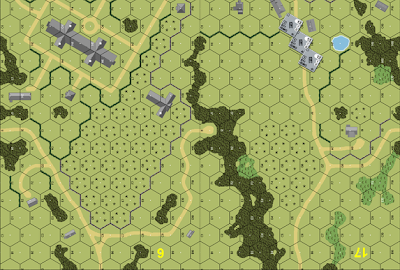 The Map looks like the above with The Nationalists starting with 3 tanks on board in motion heading North (up). A portion of the Republicans including an LMG, MMG, 3 foxholes and a couple of leaders start within one hex of 17H4. The rest of the Republicans set up on board 6 on or south of Hexrow C.

VC: If the Republicans gain control of Building 6N4, they win immediately. Otherwise, the side at game end that has control of the majority of the 4 buildings 6K1, 6K4, 6K8, and 17P2 wins. If there is a tie there, the nationality with the most CVP wins. If that is a tie, I think the Nationalists win.

We played 4 turns and as usual, I lost. On the upside, my infantry play was, for the most part, solid. The fact that I had been working 50-60 hour weeks for the past couple of weeks, did not help my math skills, however, and I missed a couple of key points.

1.) I realized at the beginning that initial speed was key. What I failed to do was sustain it through turn two (more later).

2.) The key to winning this scenario as the Republicans is to make the Nationalists dig you out of the buildings.

Here is what happened:

1: On turn one, I moved out of board 17 toward 6K8 to take it. The MMG stayed behind and immobilized the lead tanquette in place. My board 6 guys split, heading to 6K1 and 6K8. I had thought to use the tree line down board 6/17 to approach the 17P2 building (that was a mistake). I also misadded and didn't realize that I could get guys into the 6K1 building in the APh on turn 1 from C5.

Rob moved in and got a pair of MMG's into L2 of 17M5 which is a singularly bad place for them to be if you are at all out in the open on board 17. From there, he could go to M6 and cover the rest of his vulnerabilities if he had to. A good move. He advanced forces into the K1 building (because I'm dumb) and the 17P2 building without a fight, taking them.

2: This turn I took 6K8 (Which I think belongs to the Republicans anyway). If you do the math, the Nationalists can't get to it until their turn 2 anyway. I also started a squad toward 6K4 to try to take it and wait for reinforcements. I moved a squad and LMG into K1 opposite Rob's forces.
Rob moved to form a picket line between the hedge and 17P2. This effectively prevented me from taking that building without extreme cost if at all. Rotating guys between the building (to gain concealment) and the line kept me at 1/2 FP shots all day. The two tanquettes that were left were now taking fire on their Front Armor from the MG's instead of their rear. TK# is a 3 for immobilization and a 2 for a kill (which also happens to be the Nationalist SAN - DOH!!!). He also advanced into 6K1 for CC. This was an interesting battle because my squad took out 1.5 of his before we called the game at the end of turn 4 without dying. Rob also took 6K4 this turn.
3: The battle for 6K1 went on as somewhat of a slug fest and it started to look like things were not going to go well for my Republicans even though I took a prisoner for failure to rout which helped my CVP a lot. I was ahead in CVP but still needed to take another building to make it come to that. I began to shift forces out of 6K8 up the treeline to try to take a crack at the picket line with at least a +1 TEM. The 2 BMG's were in 6O10 and 17O1 making it difficult so I decided that I'd have to try to close and CC with them. At 1:1 odds, I'd had some good luck in the other CC's and with a TK# of 3, it was a far sight better than trying to gun them down with a MG.
Rob didn't move around much. He reinforced the CC we had started and started another one in 6J3, which my guys held their own in as well amazingly enough.
4: I moved more guys toward reinforcing the thrust toward 17P2, but they got gunned down by the MMG's in the stairwell of the building. I had leaders there but the DM killed me during that turn. I broke my MMG trying to kill a tanquette (there wasn't much else for them to do) in prep fire. I managed to get in close to the tanquettes and enter 1:1 CC with the 6O10 one with a squad but failed to kill. So did Rob. The other one I tried it with got pinned prior to entering the hex.
This is when things started to fall apart. Rob's picket line was intact. His MMG's in 6M5 were pissing down a whole lot of bad news on my guys on the left side of board 6 and if my guys down the tree line looked like they were going to be able to have a go at it, he could still shift and have flat shots all day into the trees with his leader directing. To add insult to injury, he decided he was going to run over my guys with his tanquettes. Overrun broke both squads there and put him close enough to DM the guys that he had already broken in/near 6K8. The squads he passed would be captured and he would pass me again in CVP with essentially my entire right flank useless. The MG's couldn't take the position by themselves and I wasn't going to be able to turn my guys with the leaders that had re-DM-ed around in time to get them back in the fight and close to the objective.
The CC in 6K1 was going OK, but Rob had the forces to keep reinforcing it and eventually, he would have realized that with the right side won, all he had to do was delay and keep me out of buildings and he would win. At that point, he feeds guys to the CC, just to tie me up. I conceeded (also it was late and I was REALLY getting tired and still had to drive 20 min to get home).
The key for the Republicans in this scenario is to take 6K1 on turn 1. 6K8 is a Republican building on turn 2 because of the MF required for the Nationalists to get there. Good luck taking 6M5 (if there are any grog's out there who have done this, I'd like to hear the story). The other key is getting forces in position to contest 6K4 (I should have sent everyone on board 6 up the left side), and rushing forces up to the hedgerow by 17P2. If you do that, the tanquettes have to turn to fire, and they are in motion. Meanwhile, leave half squads with the two MMG's at the start on board 17 to shoot up the tanquettes while you still have rear shots. When the Nationalists enter on turn 1, they can't take 17P2 without getting really shot up and even when they finger their way into the building (and/or 17P4), there is really no place to rout to.
If you take 6K1 on turn 1, then the Nationalists have to try and dig out concealed units in a stone building . Bad news on any day.
All in all, this was a fun scenario, although, I'm not sure I would play it again. It just didn't appeal to me as a classic like Rocket's Red Glare (G6) or Gavin Take (T1). I'm not even sure why it didn't. I don't feel like it needed more toys or anything. It's not like I didn't like playing it. I don't know. Just my wierd taste, I guess.
But it's like I always say. Some ASL is better than no ASL at all.....
Posted by Josh at 8:32 AM

Hello Josh, nice AAR and great blog. I just discovered it this morning. I'm a fellow Spokane ASLer myself, just returning to the game after a ~10 year hiatus. Hopefully we'll get a chance to meet and/or play before too long -- I'm planning on going over to Bob's on Sept. 19.

Glad to have you back in the fold. I won't be there as I'll be flying back from Mexico on Business, but I should be there at least once (hopefully twice) in Oct. Hope to see you there.